From WORDS to CONCEPT to DESIGN…

In this example, see how our writers summarized a large NASA mission into a few KEY WORDS and sentences.Then, they put their vision in writing to develop a CONCEPT. Once approved, the concept is handed over to the DESIGN team to put words and vision into a compelling marketing piece. 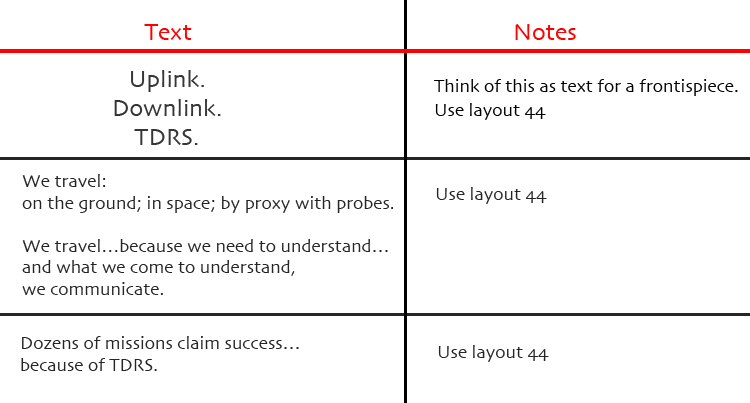 On panel A, we would lay out the text this way: place the word UPLINK in the upper left corner, the word DOWNLINK 1/3 of the way down the panel but pressed part way over to the right side. Then  “focus a beam” of energy transmission straight down and have it become the sun rising over an illustration of TDRS, in orbit over the Earth. The Earth will be very, very low on the panel, shown as if through a long lens, almost a straight line across the panel as we look out over it’s horizon. The satellite will be in the foreground, with the sun cinematically backlighting part of it. In the twilight Earth beneath, we’ll see the word TDRS. The whole presentation should look very cinematic, like a movie poster.

On panel B, the words “We travel…” should appear in the upper left. Directly beneath we should experience an “impossible” landscape, or at least a surreal one. This image progresses from left to right: in one blended image, we should experience a close up of desert surface, with stones and cactus and rutted ground that blends seamlessly into a view of the Earth from space, where some of the ground features blend into things like cloud formations and coastlines. Finally, the image will show the limb of the planet and we will experience deep space, with planetary rings and then nebular gas and glowing stars  taking the place of cloud formations and surface features. Then, in the lower right we will see the next lines, “We travel…because we need to understand…and what we come to understand, we communicate.”

On panel C, we will set an analogue set of cards (think an old Rolodex) as if they’re slightly separated and extending back in time. They will be at an angle, extending on a gently raked diagonal across the panel, each one naming a mission that used TDRS for one reason or another. (Just about all missions going back 20 yrs can claim this…) Place the cards on a starry background, with an illustration of an Atlas rocket taking off on the far left, the exhaust smoke blending into the star field to set off the card illustration. The text will appear in a box that overlaps the edge of the rocket plume and runs into the star field. “Dozens of missions claim success…because of TDRS. “

THE DESIGN: (click on image to view high resolution artwork)